Researcher Samia Hathroubi: What peace education has to give in a France threatened by the stoking of violence and extreme polarization?

When I heard that one of my former students had died fighting for Isis, I understood that more needed to be done to raise righteous adults.

I can remember very vividly both what I was doing and where I was on the dark night of 13 November 2015. I was not in Paris. A Dutch political party convention had invited me to discuss my civic and political engagement in France and more specifically regarding the stakes of ethnic and religious diversity.

In previous years, I had devoted a lot of time and effort to explain the specificities of France, both its political and philosophical dimensions. Its proud history of revolutions, its colonial expansion in the 19th century, its Republican ideal which, beyond the motto Liberté, Egalité, Fraternité, tries, as best it can, to remain ”blind” to racial, ethnic and religious differences. Reality does not always meet this ideal. I, the daughter of ex-colonised and Muslim parents, who were stuck in precarious jobs and urban ghettos, and yet who had climbed the social ladder, could explain this too. I knew how to illustrate the intricacies of France.

On the night of 13 November 2015, the night of the Bataclan attacks and the terrorist acts that bloodied French spirits and hearts, I was convinced that we would have to start all over again. Like Sisyphus, the king of Greek mythology who was forced to eternally push a large boulder up a hill, only for it to roll down again, I knew that those like myself, engaged in a collective effort to bring people together, to listen, to respect and to fight for equal rights, would have to ascend this hill again.

That night, a distant memory of a play by Giraudaux, a classic French play (1) based on the myth of the Trojan War, flashed into my mind. Giraudoux wrote it in 1935 as a warning of the World War he felt was breaking out. In France, literature often has premonitory, cathartic or inflammatory properties.

A few months after the attacks, Michel Houellebecq’s novel Submission (2) published in January 2015, was the best-selling book in French bookshops. This political fiction portrays France in 2022, on the brink of a civil war. Mohammed Ben Abbès, president of a fictional Muslim party is elected president of France in the second round against Marine Le Pen. His two flagship measures are the Islamisation of national education and the authorisation of polygamy. François, a depressive university professor, describes this fractured society, where the extremes are seductive.

Today in 2021,  we are at the dawn of new presidential elections, where the extreme right-wing candidate Marine Le Pen is likely to make it to the second round (3), as in 2017. Contrary to 2017, when the current president Emmanuel Macron was described as a champion of liberal democracy and progress, four years later his policies have only worsened social inequalities (4), instituted a policy of massive surveillance on Muslims (5) and launched an ideological hunt against many rights defenders. Having Marine Le Pen at the gates of power is a frightening scenario in itself in a country where power is concentrated in the hands of the president.

Other developments are more insidious, surreptitious and distil the venom of hatred and lay the seeds of a war of everyone against everyone. Since 2015, France has continued to be the scene of terrorist acts linked to Islamism. This deadly policy has a clear ambition: to sow chaos in the European country with the largest number of Muslim citizens. To accelerate the clash of “them” against “us”. This also seems to be the objective of the identitarian and extreme right-wing groupings. In recent years, these movements have been quietly preparing for their big night. French extreme right-wing thinking has an important ideological influence in the world. The murders in Christchurch, New Zealand, were committed in the name of the ”Great Replacement” conspiracy theory (6), which was developed by a French author and which is widely promoted on French TV channels.

For those who look carefully at the threats that hang over our lives and our heads, a scenario of stoke violence like the one described by Houellebecq is no longer a fantasy.

For historian Nicolas Lebourg, a member of the steering committee of an academic research programme on violence and militant radicalism in France,  the risk of the ultraright comes from an ideology that intends to “hasten the start of a racial war”.

Talking about a civil war in France always seems bizarre for a distant observer, who might fantasise about France as the champion of the French Revolution. It is strange also to the activist and the researcher that I am – who has seen with my own eyes the chaos of identity and sectarian clashes in the Middle East.

Before my civic and political commitment, I was first a teacher in the most deprived and impoverished areas of the Parisian suburbs, advocating education and history to educate my pupils about the mistakes of the past so as not to repeat them. I lost some of my beliefs when, a few days after the attacks of 2015, I learned that one of my former students had died fighting for Isis.

The day after I heard the terrible news, I gathered my former students, his classmates, in my Parisian office to welcome our pain and exorcise our sorrows. I needed to understand what had driven this gentle and taciturn student into the hands of the terrorist hydra. International geopolitics, the absence of a future, successive failures and contempt will have had their way with him. Having nothing or almost nothing, losing everything, even his life, seemed to be a better future for him.

In the minds of the European and French elites, peace education seems to be reserved more for Palestinians and Israelis than for citizens of one’s own country. However, that day, I gained the deep conviction that more needed to be done. Confronted with the risks arising from the extreme polarization of the civic and public debate, and the collapse of social capital (7), the cement of democratic development, it is urgent to raise righteous men and women. There’s a popular saying in France that we often attribute to the Swiss playwright Max Frisch, that conveys the paradoxes of our democratic and liberal societies in the midst of the perils we might be facing: I fear more the silence of the slippers than the noise of the boots.

Education to be actors for peace is only possible if it is based on equal opportunities and chances. To make citizens actors of peace, they must first have the feeling of being the makers of their own fates. Giving young people the opportunity to take control of their professional destiny, of the way they want to define themselves and of imposing their voices/ways has been the compass that guides both my activism and my work. For more than ten years now, I have been coaching and mentoring young girls from modest backgrounds and immigrant origins in an association called Rev’Elles, for instance (8). I make real what I preach in an embodied way.

Not a month goes by without me thinking about Adama, my former student. Not a month goes by without me thinking about the future of my nephews and nieces born in France. I wonder how they live with the existential threats to our lives, the racism that comes to remind them at school at a young age, and the risks of stigmatisation and exclusion. Hardly can I bring an end to all this turmoil, but I can continue to make my own voix/voie – my voice/way (two words which in French are pronounced the same, but have different meanings) emerge above this noise by writing our history and by inscribing our presence in both fictional works and in the scientific debate, so that, sure of themselves and their present, they will fight tomorrow for their future.

Samia Hathroubi is a researcher, currently doing her PhD in Sociology at the University of Heidelberg, focusing on interethnic interactions in the urban environment of Paris and Berlin. A polyglot, she has been a teacher of young people from impoverished areas of the Paris suburbs, a director of NGOs in France and in Europe and the Middle East. She has contributed through her programmes, her advocacy work and her columns to the public debate for the inclusion of the most vulnerable. 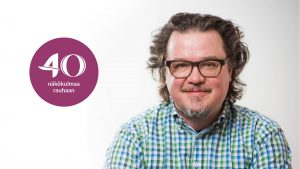